What are religious perspectives on FGM/C?

Religions promote compassion, dignity of life, and non-violence. With these as tenets of faith, a practice such as FGM/C should not be accepted. Though the exact origins are unclear, the practice of FGM/C has been found to have occurred before the existence of most major religions1,2 and we do know that FGM/C is NOT required by any one religion or faith.2 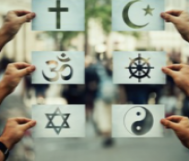 “Religious leaders have a crucial role to play in explaining that this is not part of religion.” 3  However, some faith leaders have supported the practice, and religious texts have been misused to reinforce this support. Consequently, FGM/C has been mistakenly linked to Islam and certain sects of Christianity and Judaism, including Coptic Christians and Ethiopian Jews.4 Therefore, faith leaders must play a role in correcting these mistakes, and dismantling the myth that FGM/C is sanctioned by religion.

A common misconception is that FGM/C is required by religion.5 This is not true, but supporters of FGM/C have misused religion to justify the practice. Therefore, it is important for all faith leaders, regardless of gender or background, to address these and other misconceptions and to raise awareness against the practice.

"It is the duty of a faith leader to provide spiritual guidance, not to create spiritual crisis."

Below we have listed some religious perspectives on FGM/C, gathered from faith leaders who supported this effort. Within these, we have also included some common misconceptions about the practice and resources that can support efforts to help end the practice of FGM/C.

Islam is a religion that promotes compassion, mercy, and dignity of life. As FGM/C has been known to harm women and their happiness, the practice cannot be acceptable, as it violates the fundamental rule in Islam to do no harm: “There should be neither dharar (harm) nor dhiraar (reciprocating harm).”6 Therefore, many religious scholars and organizations of authority, like Al Azhar University in Cairo, the International Union of Muslim Scholars, and The Organization of Islamic Cooperation (OIC), have clearly condemned FGM/C.7,8,9,10

FGM/C has been incorrectly linked with male circumcision, khitan, which may be recommended for men based on religious texts and its potential health benefits.*,11 It is essential that male circumcision not be compared with FGM/C, which is a harmful practice towards women.2  A clear, open dialogue is needed to address any misconceptions since FGM/C is a secretive practice that is rarely discussed in public. Many people are unaware of the misunderstandings or the weight of Muslim religious authority against it.10

There is no true mention of FGM/C in the main religious text for the Islamic faith, the Quran.*,13 An Imam we spoke with noted that the Quran is the word of God, while all other practices or understandings around Islam are created by human beings.* Therefore, FGM/C NOT being included in any verse of the Quran is important to note for Muslims.

-Sunna - Life of the Prophet Muhammad

The life of the Prophet Muhammad can be used as a model for Muslims to strive towards. It becomes clear that FGM/C is not a religious requirement under Islam when looking to the life of the Prophet.* The wives and daughters of Prophet Muhammad were not cut and he did not emphasize FGM/C in his life.* This can be used as evidence that FGM/C is not welcome in Islam.

There are a few Hadiths (sayings of the Prophet Muhammad) that have been referenced in support of FGM/C, though many Imams and Islamic scholars have shown these to be misinterpreted and misused, as they clearly refer to male circumcision, and some are all together unauthentic.*,6,7,8,9,13,15  Overall, there is no authentic Hadith that suggests Prophet Muhammad’s support or approval of FGM/C,13 and religious rulings can only be deduced based on highly authentic texts.

Refer to these resources for more information on the interpretation of the Quran and Hadiths and evidence on how Islam does not require FGM/C:

We know FGM/C happens within Christian faith groups in countries such as Kenya, Ethiopia, Nigeria, Niger, Tanzania, Burkina Faso, and Sudan.4,5,16,17 In Egypt, FGM/C is also known to be practiced among individuals belonging to the Coptic church.18

Historical accounts of FGM/C have been documented by Christian missionaries in Africa from the early 1900s. FGM/C is thought to be a practice of many different tribal groups; for example, many in the Kikuyu tribe continued to perform FGM/C in the name of tradition after converting to Christianity.19 The church has attempted to decrease the continued practice of FGM/C by using methods such as preventing families from becoming full members of the church or to not baptize individuals if they had their daughters cut.19 FGM/C may have continued in Christian communities out of a rebellion against colonial powers, but does not have a tie to any Christian texts or values.19

There is absolutely no mention of FGM/C in religious texts for the Christian faith, including the Old Testament and New Testament of the Bible.4,20

Christianity emphasizes humanity, non-violence, and the protection from harm. More specifically, it elevates the status of children, and FGM/C is seen as a violation of the mandate that children must be protected from all forms of both harm and abuse such as FGM/C, as indicated in the Biblical scriptures:

“Whosoever therefore shall humble himself as this little child, the same is greatest in the kingdom of heaven. And whoso shall receive one such little child in my name receiveth me. But whoso shall offend one of these little ones which believe in me, it were better for him that a millstone were hanged about his neck, and that he were drowned in the depth of the sea.” Matthew 18:4-621

“….Let the little children come to me, and do not hinder them, for the kingdom of God belongs to such as these” Mark 10:1422

The preservation of life is central to Christian teachings as indicated in Gen 9:5 “And for your lifeblood I will surely demand an accounting.”23 Since FGM/C can lead to death, it is a threat to the life of women and girls, it is therefore a practice that conflicts with Christianity.

Self-harm must also be avoided, since the body is viewed as “a temple of the Holy Spirit” (Cor 6:19)24 and it must be treated as a temple, cared for and preserved as a religious obligation. The bodily harm caused by FGM/C violates this obligation.

Here are some other scriptures about protecting women’s rights and against violence:

Other religions, especially small sects/minority groups within a religion, have also been linked to FGM/C. For example, although FGM/C is not included or justified within the Torah, members of the Beta Israel community in Ethiopia, a minority group of Orthodox Jews, have been known to support and practice FGM/C.4,20

Similar to the previously mentioned religions, faith leaders note that major religions exemplify compassion and are against harm or violence25 and have principles that may help signify that FGM/C is not a religious practice or requirement.

For example, Buddhist scriptures suggest the practice of ahiṃsā. Depending on the context, ahiṃsā can have a negative connotation of causing suffering and hurt and/or a positive meaning to promote humanity and kindness.26

Translation: "He is not noble who injures living beings. He is called noble because he is harmless towards all living beings." 26

In their own words: what are faith leaders saying about FGM/C?

“I think there's probably a lot of folks who don't have a lot of knowledge, who might see this as akin to a male circumcision or something like that. And so, I think that's probably the first issue - raising the understanding that this is a deeper problem and that there's not just the health risks, but the emotional - there's other scars that go with it.”*

“I would call it blasphemy theology saying that God Almighty will look down upon women if they don't hurt themselves or they don't have a practice [FGM/C] that may let them lose their life. Just unbelievable justification, all about men.”*

“We know these are traditions that were in place way before even Christianity and certainly before Islam. And then they’re not carried on as something emphasized by Islam, quite the opposite something discouraged. So we look at his [Prophet Muhammad (peace be upon him)] life, he had daughters. His daughter Fatima Radyallah Allah, May Allah, God, be pleased with her, we don’t find where he did that to her. Again we don’t see that with any of the wives, that process is done to them. It’s not there, so that’s just strong evidence.”*

Hear from other faith leaders in the videos below, who also debunk the notion that FGM/C is connected to religion.